The ultimate cognitive-enhancing BCAA and nootropic supplement for those who want need to unleash their peak performance!

High performers demand the most of themselves in everything they do.

Whether it’s unlocking intense mental focus while studying, experiencing limitless mental clarity at work, finding smooth energy in the gym, or tapping into extreme focus while gaming - AminoIQ² is the ultimate formula for those who want to push themselves beyond their human potential.

AminoIQ² is loaded with 6g of Vegan Sourced BCAAs and 3.6g L-Leucine per scoop, proven to preserve lean muscle tissue, stimulate muscle growth, and maintain cognitive function that can decline from intense physical activity. With the perfect combination of BCAA’s, caffeine, and nootropics - AminoIQ² is truly the optimal fuel for the mind and body.

Fuel yourself for more. Get AminoIQ² and #GoBeyond today!

L-Leucine - Is often referred to as the ‘master’ branched-chain amino acid (BCAA) because it’s the most effective at activating mTOR, a pathway that induces muscle protein synthesis, muscle growth, and recovery.

L-Isoleucine & L-Valine - Are the other two of the three branched-chain amino acids that work synergistically to support increased muscle protein synthesis, muscle growth and recovery. Isoleucine has been shown to promote glucose consumption and uptake and has roles as an anti-catabolic agent without promoting synthesis, similar to HMB.

Acetyl-L-Carnitine – Also known as ACLAR, acetyl-L-carnitine has similar benefits to the amino acid L-carnitine but crosses the blood-brain barrier more efficiently. Carnitine creates energy from fat in the mitochondria of the cell and has been proven to reduce fatigue, improve mood, mental energy, brain function, decrease inflammation, boost circulation and improve overall focus.

L-Tyrosine - An amino acid that is used in the body to produce noradrenaline and the “feel-good hormone” dopamine. Tyrosine has been shown to reduce stress, increase focus, mood and memory.

Choline - A nootropic molecule that has been shown to boost cognitive function by increasing acetylcholine, a chemical often referred to as the “learning neurotransmitter”. Acetylcholine is used in the brain for nerve cells to transmit signals. Thus, acetylcholine plays a crucial role in many brain functions such as learning, focus, memory and mood.

Deanol - Also known as DMAE, increases the production of acetylcholine, a chemical that helps nerve cells transmit signals. It can also protect neurons and other cells from the harmful effects of certain types of oxidation by acting as an antioxidant.

Caffeine - Classified as a nootropic because it sensitizes neurons in the brain and provides mental stimulation. Caffeine has been proven to improve reaction time, alertness, memory and mood. Caffeine also works synergistically with other nootropics to enhance the overall experience.

Black Pepper - Proven to significantly increase the bioavailability of ingredients in dietary supplements.

Mix 1 scoop (9.3g) of AMINO-IQ² with 6-12 oz of cold water immediately before consumption and drink it 45-90 minutes before your workout or as a nootropic aid during periods requiring mental alertness.

ATHLETE DISCLAIMER
Warning: If you are a tested athlete, it is your responsibility to check with your sporting organization’s rules and regulations or with designated athletics staff before using this or any supplement to be sure all ingredients are safe for your sport.
Why People Love Amino-IQ.

No Sugar, No Calories - Skip the high sugar, high-calorie energy drinks. AminoIQ² gives you cleaner energy and full taste without the added calories.

Free of Artificial Dye & Additives - The commitment to go beyond means ditching the stuff that doesn’t serve you. At Beyond Yourself, we do just that. AminoIQ² has been formulated to deliver unbelievable taste and mixability without any unnecessary dyes or additives

Free of Artificial Dye & Additives - . At Beyond Yourself, we do just that. AminoIQ² has been formulated to deliver unbelievable taste and mixability without any unnecessary dyes or additives

Hear directly from our team at Beyond Yourself HQ about how we've formulated Amini-IQ to be the ultimate nootropic formula designed to take your focus and mental clarity to a whole new level.

AminoIQ is my go-to pre-workout mix. I am not a fan of beta-alanine (what gives you the tingles), and don’t like super high caffeine that’s in most pre-workouts. That’s why I love AminoIQ! It’s the perfect amount of caffeine (100mg/scoop), and also includes nootropics and BCAAs - helping keep me dialled in during my workout and recovering better. I highly recommend using this as your pre-workout if you want an extra kick, but don’t want something as aggressive as a classic pre-workout mix.

I love amino IQ, I use it as a pre workout and it helps me dial into my workouts so much more as opposed to without it.

Doesn’t hurt my stomach and overall an amazing product and I recommend to all my clients and they love it.

At first I was skeptical but after the first use you can feel both energy surge and the cognitive improvement, I has helped me go from your average D2 and D1 goalie to a now feared opponent, now I can’t play without it! 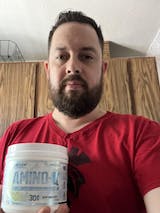 Love IT ! I take IT during the Day to help me focus on my work !